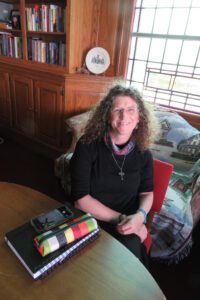 Reverend Jeanie Collins has always focused on the big questions: why are we here, what is my purpose, why bad things happen? In her ministry to Rutgers University students, RUSpiritual, she facilitated discussions of the big questions, and although it was not her intention to answer these universal puzzles, the act of engaging in the discussion has proven useful for anxious young people.

“It always comes down to connecting, even though it has been difficult lately because of COVID. We are social creatures.

Collins joined the Tuckerton Presbyterian Church community in January and also works closely with the Brigantine Community Presbyterian session. Previously, she served as the Alliance Pastor for the Greenwich Presbyterian Church in West Jersey Rectory. As Director of Rutgers’ Protestant Campus Ministries: RUSpiritual, she has ministered to students and the wider community through interactive art installations and contemplative Christian worship and practice in traditions of the community of Iona in Scotland. She built labyrinths for meditative walks and group kaleidoscopes.

Her mother is Scottish and Collins has made several trips to Scotland. She was the director of the children’s program for two years at the community of Iona on the Isle of Iona, believed to be the birthplace of Christianity in the British Isles.

His immersion in Scottish culture awakened his love for folk music. She performs Scottish folk a capella ballads and her recordings are part of the permanent exhibition of the Jacobite Wars at Edinburgh Castle.

In 2013, Collins was also involved in the “Whisper Ministries,” which was in response to the massive loss of jobs in Atlantic City that year. “Whisper” was a combination of small group bar conversations and a YouTube show aimed at reconnecting disenfranchised people with religious communities.

“I think we have to be the hands and feet of Christ, so we have to go where the people are. People are spiritual even when they think they are not.

Collins’ first calling was as a pastor at St. John’s United Church of Christ in Egg Harbor City. She has experience as a Chaplain of Hospices for the Holy Redeemer in Cape May, Atlantic and Ocean counties.

“I have always been interested in end-of-life issues,” she said, “and we will be having the first ‘Death Café’ in this region on Saturday October 9 from noon to 3 pm”

Death Café was made popular by National Public Radio and has grown into a national movement.

“We won’t sell anything. There will be no proselytizing or speaker. It’s a chance to talk about death and death and mourning, ”Collins said. I have found the conversation to be different every time I have one.

“This is the opportunity to talk about a taboo subject; ideas jostle and friendships are formed. Death is part of our history – we have a beginning, a middle and an end. It’s still there, and it’s best to face it, admit our fear and face it together.

Another interest of Collins is working with people with intellectual disabilities as a means of providing spiritual support through music and artwork. This ministry is under study.

“I think a big part that the church is going to play in the future is the face-to-face community that we aspire to,” she said.

Collins feels that the young people who rely on social media are missing out on the community.

“They don’t face conflict; they simply disapprove of people or withdraw from a situation. They must find new paths to reconciliation. We still have to find common ground, even in big disagreements – we must always live together in peace. “

Collins lives in Galloway Township with his two sons, who attend Stockton University. She also raises her flock of chickens there.

Tuckerton’s First Presbyterian Church is located at 210 East Main St. and has reopened for in-person worship.

Next Chaos threatens Christians in Afghanistan